Not Pretty Enough to be a Patriot 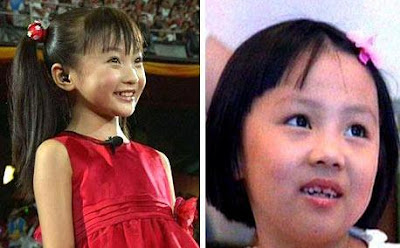 The girl on the left is Lin Miaoke, 9. Clearly a cute girl, she has already appeared in television commercials. In the opening ceremonies at Beijing, she received a huge honor. She sang "Hymn to the Motherland" to millions of viewers around the world. Consequently she's become a young sensation, "giving interviews to all the most popular newspapers."

But it turns out Lin Miakoe was a pawn. She was used because the real singer, Yang Peiyi (on the right) wasn't pretty enough to represent her country. Because she has buck teeth.

In interviews, the musical designer said this was not the first time girls were weeded out for looks,

...A ten-year-old had originally been chosen for the quality of her voice. But she, too, had fallen by the wayside because she was not "cute" enough.

"We used her to sing in all the rehearsals," Mr Chen said. "But in the end the director thought her image was not the most appropriate, because she was a little too old. Regrettably, we had to let her go."

Too old at ten?? Not cute enough at ten?

Then they found Yang Peiyi who they thought was "flawless." Until someone brought up her teeth. But turning away little girls with obvious talent is not disgusting, sexist and hurtful. It's all about P.R.

But, it's not like I couldn't see this same garbage happening elsewhere. I just thought the Olympics were bigger than that. About pride, honor, and bringing the world together. Turns out it's just another lesson to little girls that what matters most is your looks.


PS: Both of these little girls are adorable

UPDATE: According to CNN, Yang Peiyi was passed up due to teeth and a face that was "too chubby" -- UGH!

Sarah @ All The Book Blog Names Are Taken said...

This is so sad. And it simply looks like she still has a lot of her baby teeth, they act like she is horribly disfigured. I feel bad for both of the girls, so sad.

They've done both girls a disservice with that decision

hey wanted to give you props because i read about this on your site before it was front page news in my local newspaper. :)

As much as I have loved learning about China and Chinese history, and all of my Asian studies, there are so many things that I abhor. Their horrific decisions in the name of saving face are some of them. This falls smack into that.

I have a lot to say about the Olympics in Beijing, being that I was smack in the middle of my Chinese studies when the choice was made and know what it means to the common people of China, not to be confused w/ the government of China and what they do. I won't get into it here, but it is tough, knowing what it means to the people of China to be seen as not a backwards nation and taken seriously world wide, but at the same time the government pulls this shit to look better. China is not doing it's people any good w/ this kind of crap. And the world is watching.

I agree with you in that this blame lies solely on a government that is just-- way too -- I don't even know the proper word to describe what they are. But China has done a disservice to their people here.

This sort of thing happens in American, too. Maybe not on such a grand scale, but we do it all the time. It's so sad that we teach little girls (and grown women) that looks are the most important thing to have.